Back in 2018, when Hwang Dong-hyuk, the director of Squid Game, walked into Netflix’s makeshift offices at WeWork in Seoul with the script he had written for Squid Game a decade earlier, he probably didn’t expect this much success. In the first month after the famous Korean drama Squid Game was released, nearly 150 million families around the world watched the show, and the audience ratings ranked first in 94 countries including the United States. The rapidly rising ratings and the phenomenal popularity of Squid Game triggered the equity rally of Netflix, the leading streaming media platform behind the show. Squid Game isn’t Netflix’s first blockbuster hit. From 2012 to Q1 2021, Netflix released 779 original series, of which popular high-quality series accounted for 20.67%. If you consider Netflix as a venture capital firm, that’s an impressive hit rate. The big question regarding Netflix is, what’s the magic code of always picking the hit show among thousands of projects and earning huge returns?

The Power of the Algorithm​

From the outside, Netflix is a streaming platform, while on the inside, its core engine is AI algorithms and big data. Reed Hastings, the founder, and CEO of Netflix was born in a lawyer’s family in Boston. He earned a bachelor’s degree in mathematics from Bowdoin College, then a master’s degree in computer science from Stanford University, and spent two years as a math teacher in South Africa. In the early days of Netflix, Reed Hastings had already realized the importance of algorithms. In 2006, Netflix held an algorithm contest called Netflix Prize, which sought to select the best algorithm to “improve the accuracy of predicting how much people would like a show based on their behaviors and preferences”. When you open the Netflix page, the algorithm analysis for you personally has already begun. Every play, pause, rewind or fast-forward of a particular show, or even the time, place, and equipment to watch the show, will be converted into data and eventually form a complete picture of you, which will become an important basis for Netflix to make recommendation decisions. To keep users on the Netflix page as long as possible and convert them into paying members, the platform is constantly improving its recommendation mechanism and developing “Netflix Quantum Theory,” which further refines the traditional movie and television categories. The theory is summarized as “micro-genres of film: region + adjective + genre + source of creation + set time + plot + content + suitable audience +…” . Such highly-detailed categories are called “micro-genres”, and Netflix currently has a total of 76,897 micro-genres. With the dual evolution of recommendation algorithm and user behavior, Netflix introduces different screen and video guidance according to each user’s habit. Netflix is also very strict about the arrangement of plot points, especially in the first half of the series. There needs to be a Hook (plot point) every 15 minutes or so to continuously attract the audience’s attention with highly intensive information. The famous TV show House of Cards was the first validation of Netflix’s algorithm pattern. 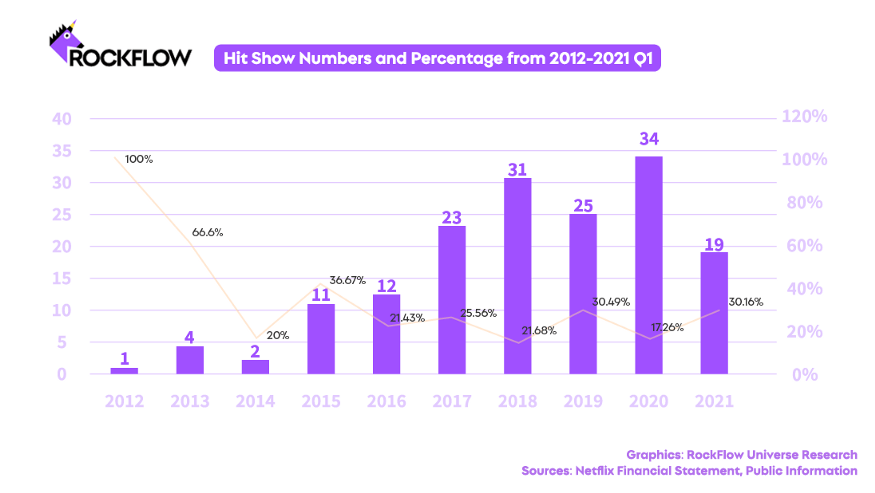 From 2012 to Q1 2021, Netflix released 779 original series, 161 of which were rated as popular high-quality series with more than 60% ratings at Rotten Tomatoes, accounting for 20.67% of the total. The popularity rate of Netflix’s homemade dramas has remained above 20% on average since 2016.

The popularity of Squid Game is another big-data-driven victory for Netflix. Since its debut in September, Squid Game has become Netflix’s most-streamed series to date. According to former Netflix employees, “Squid Game” cost only $21.4 million, but brought about an estimated $891 million impact value to Netflix in terms of subscribers renewal rates, new subscribers, brand reputation, and more. After two years of investment, Squid Game has brought a nearly 40 times return for Netflix. If measured by the standards of venture capital, its internal rate of return (IRR) reaches 517%. During its five years in Korea, Netflix invested $700 million in 80 original shows. If you consider the first five years of investment as Netflix’s Korean sub-fund, Squid Game alone recouped all the investment costs of the fund. A good global fund usually does a good job of localizing its decision-making power. So is Netflix. When Minyoung Kim joined Netflix in 2016 as head of content for the Asia-Pacific region, her main job was to “find good stories from Korea.” Just as investors actively seek projects through social networks, a big part of Kim’s work is communicating with writers, directors and producers, and finding good storytellers through social networks. In 2018, when Netflix was not that well known in South Korea, director Hwang Dong-hyuk approached Kim in a small makeshift office at WeWork and handed her the script of “Squid Game,” which he had written a decade earlier but had been rejected in local show business. For Kim, with thousands of scripts, her investment criteria rely more on data. “We take inspiration and feedback from the user data we already have. As creative directors, we also use our intuition to figure out what shows we need to deliver to maximize our audience’s enjoyment.” Kim said. “Netflix is always trying to fill the gap between what’s out there and what people want.” So when Kim saw the special story of Squid Game, she immediately decided to invest. Using real-time user data accumulated by the platform to determine whether a show is popular or not, or how many paying customers it will attract. Netflix, as a streaming media, can use market demand to guide the next investment decision, to improve the investment success rate.

Big data has become an invisible industry moat for Netflix, and even its failed investments data feedback is a valuable asset. The success of “Squid Game” is just the outcome of Netflix’s global localization strategy after constant trial and accumulation of local user data. Take the localization strategy in Korea as an example. Netflix started with Korean traditional love series and then found users’ long-tail preferences through cooperation and user feedback data. Under the guidance of user data, the script direction is constantly adjusted to select stories with both localization and international characteristics. With the combination of competitive Hollywood production standards and a high level of funding to improve the quality of the show production, Netflix ultimately found the efficient strategy for blockbuster hits. At present, Netflix’s international market has expanded from the United States to Latin America, Asia, and Europe. With the continuous accumulation of user data, the localization strategy has achieved good results in South Korea, Japan, Thailand, and other countries in the Asia-Pacific region. In recent years, it has launched “Alice in Borderlands”, “Girl from Nowhere” with positive investment results. The globalization strategy paid off for Netflix. Netflix now has 214 million paying subscribers worldwide, far more than HBO Max or Disney+. Since 2015, Netflix has had more subscribers abroad than in the United States. In the third quarter of this year, the Asia-Pacific region was Netflix’s strongest region in terms of subscriber growth. Capital markets have reacted to the success of Netflix’s content-data flywheel effect in global markets. As of press time, Netflix’s stock price is over $650, giving the company a market cap of close to $300 billion. 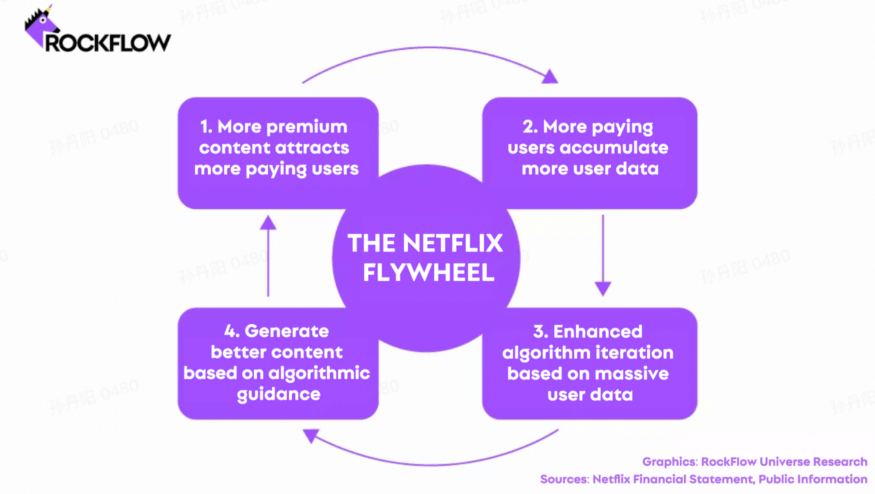