Bilibili (BILI), the most popular Chinese video platform, is under anxiety. Achieving profitability, the most fatal problem Bilibili is facing now, remains unsolved. The doubts of the secondary market about Bilibili are almost overwhelmed.

With the announcement of its Q3 financial results in 2021, the net loss of Bilibili reached 2.686 billion RMB, an increase of 144% year-on-year. Just three days after the release of its financial results, the stock price of Bilibili fell by more than 20%. For Bilibili, the lack of profit model is the real reason why investors starts to leave.

“In fact, Bilibili should have been profitable in 2020, so it would be too late if it cannot achieve profitability in 2022, indicating that its business model cannot be established.” A secondary market investor said.

There is not much time left for Bilibili to prove itself.

The dilemma after users increasing​

The flourishing content ecosystem is what Bilibili has been built upon.

Originally, Bilibili is the typical content station and community of ACGN (Animation, Comics, Games, Novels). However, it sees the survival crisis Bilibili may face if it fails to grow.

So Bilibili began to expand the content source from PUGV (Professional User Generated Video), to OGV (Occupationally Generated Video) in 2018. Its content tentacles have expanded to animation, documentary, variety show, drama series, films, and launched a series of videos. Bilibili has made a comprehensive breakthrough in its own content step by step and successfully transformed into an mass entertainment content platform.

In 4 years, Bilibili established the content ecological collaboration mode of “PUGV + OGV”. Through a large number of high-quality OGV entertainment content, they continue to attract new users to enter the platform, and then retain new users relying on the PUGV content that Bilibili is good at. “PUGV + OGV” realize complementary in inviting new people and retaining old users, to form a prosperous content ecological cycle in Bilibili.

According to the financial report of 2021Q3, the average monthly active users of Bilibili reached 267 million, showing a year-on-year increase of 35%. By the end of the third quarter, the number of VIP members in Bilibili had reached a new high level of 18.2 million, a year-on-year increase of 42%. The average daily use time for each user has increased to 88 minutes, which hits a record high.

However, behind the rich content is the high production cost. From 2018 to 2020, the content cost of Bilibili accounted for 13.2%, 14.8% and 15.6% of the revenue respectively, and the proportion increased year by year. In the Q3 financial report of 2021, the net loss of Bilibili was 2.7 billion RMB, and the operating cost was 4.19 billion RMB, a year-on-year increase of 70%, higher than the revenue growth rate by 66%.

The high content cost and the uncertainty of content results make Bilibili face the challenge of increasing income without increasing profit. Bilibili is in a hurry to find the next growth point.

The early profit of Bilibili mainly depended on games. By 2017, the mobile game revenue of Bilibili had accounted for 83.4% of the total revenue, which became its most important source of revenue.

Realizing that relying solely on the gaming business is extremely unstable, Bilibili has been reforming its own business structure and profit model since 2018, adopting various methods to increase its other business income. This includes VIP membership, advertising, live broadcast and e-commerce business.

Advertising business has been the fastest growing engine of Bilibiliin in the past year. In the third quarter of 2021, the advertising revenue reached 1.17 billion yuan, with a year-on-year increase of 110%. It has increased for ten consecutive quarters and more than 100% for six consecutive months, which has become an important driving force driving the revenue growth of Bilibili.

However, the road to the future of advertising monetization for Bilibiliis is not flat.

1: Lack of pre-rolls advertising. Bilibili, which started from a quadratic-element（ACGN）community, is based on its strong community atmosphere. On the Bilibili’s road to monetization, its community is very sensitive and exclusive to “commercialization”, resulting in Bilibili being cautious at every commercialization step. In 2014, Chen Rui, CEO of Bilibili, also promised in his microblog to “never add pre-rolls** **advertising” to ensure a good viewing experience of Bilibili.

Bilibili has less consumption content, and the commercial chain of advertising monetization is not going well. Wang Li, an life creator with 200 thousand followers, explained to RockFlow that “compared with Bilibili, top KOLs on Tiktok is more likely to have advertisements because the content of the platform has the lifestyle and consumption tendency, and users can search their needs.” The position of Bilibili determines that there are relatively fewer advertisements drawn by it.

3: It is difficult to bring product orders. When it comes to Bilibili advertising, whether it is the brand side, investors or the creator itself, is generally acknowledged that Bilibili is more suitable for brand advertising than bringing orders. “Most of the advertisements in Bilibili are brand oriented.” Wang Li said.

4: Advertising tools require to be optimized. HuaHuo platform is the official cooperation platform between creators and brand owners. Based on big-data analysis, HuaHuo can provide creators with system quotation reference, order process management, platform security settlement and other functions. Bilibili charge a 7% commission from the orders of the HuaHuo platform.

However, this tool is not as wonderful as it looks. Zhan Yunyun is a paparazzi uploader with 500000 followers. She told RockFlow that the docking process of HuaHuo platform is very complex. The brand will place an order in the background and set the corresponding upload and release time of promotion video. Once the time is missed, it cannot be released again. From the perspective of the creators, the usage experience of the HuaHuo platform is still not perfect, so its acceptance in the creators may not be as high as expected.

Therefore, achieving profitability for Bilibili is not easy.

The business model for Bilibili is the logic of content-business- content feedback system. At present, the most fundamental problem is that the main ecology of creators has been out of balance.

One of the specific manifestations of this imbalance is that commercial resources are mainly concentrate to top creators while the majority of creators in the middle-class have difficulty in monetizating and can only “generate electricity with love”.

Zhan Yunyun is a typical middle blogger “I have created on Bilibili platform for more than a year, but my revenue is not obvious. I can only regard it as the future market. Although the number of my fans on Bilibili has increased, it has not brought much reward to me for the time being. The number of advertising orders per month is generally 2–3.” Zhan yunyun said.

The unbalanced development of creators ecological commercialization can be summarized into three reasons.

First, the capacity of user traffic is small. By the third quarter of 2021, although the number of monthly active users in Bilibili exceeded 200 million, it was still limited compared to 550 million monthly active users on Tiktok, which determines that the creators of Bilibili are difficult to monetize.

Secondly, medium-length video has natural defects. Wang Li told RockFlow that the production of medium or long video takes creators more time with high input cost, but in brand promotion, it can’t show its superiority over TikTok. Top KOLs on Tiktok can publish more than 20 videos a month and promote 10 brand advertisements. But Bilibili creators may only publish 4 videos a month, with one advertisement only.

Finally, the content of Bilibili is difficult to scale production. Zhan Yunyun observed that, although Bilibili increased the weight of the algorithm twice in 2021, it will not rely on the algorithm to recommend similar content to users but pay more attention to the cultivation of user stickiness in communities and original content. “It’s doomed that the high-quality content of Bilibili is actually difficult to produce on a large scale but maintain small scale”

In addition to the advertising business, the profit of Bilibili also includes value-added services such as VIP membership and live broadcasting. At this stage, both are still in the initial stage, and their growth trends are still uncertain.

If Bilibili still fails to prove its business model through advertising business in 2022, Chen Rui will have to break his oath and seriously consider adding pre-rolls advertising. 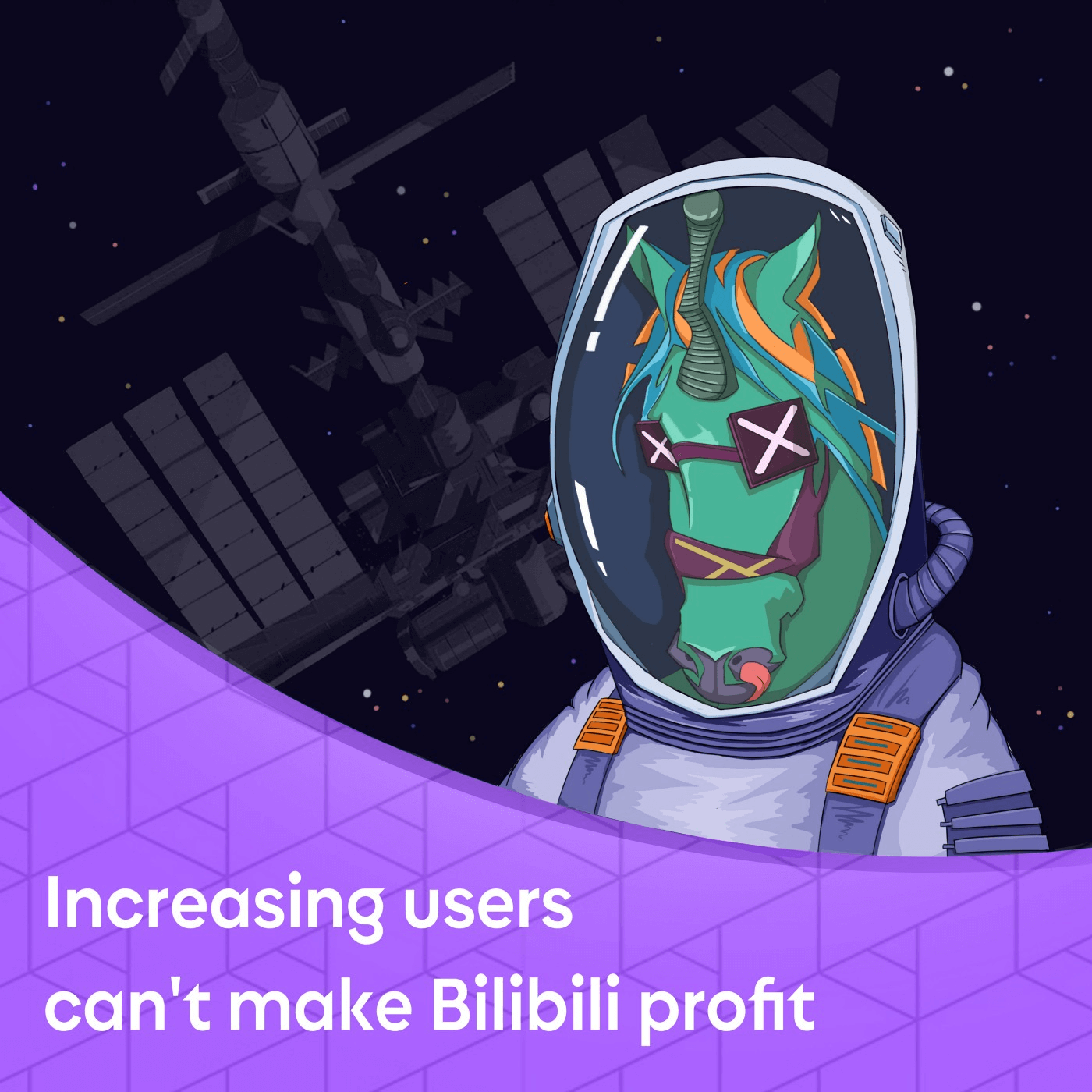