Jan 28, 2021, on Reddit, the popular social media platform where a lot of U.S. traders share their stock information, the search results for "I hate Robinhood" is rocketing. Robinhood, which once stood with retail investors against Wall Street's "financial ruling class", announced to restrict users from buying GME and other stocks in early 2021. After that, GME's stock price fell and countless people were cut off. Robinhood was then described as "a traitor to its own namesake", "went from hero to villain", and was boycotted by a group of traders. Many of its users even claimed to move on to another investing app. 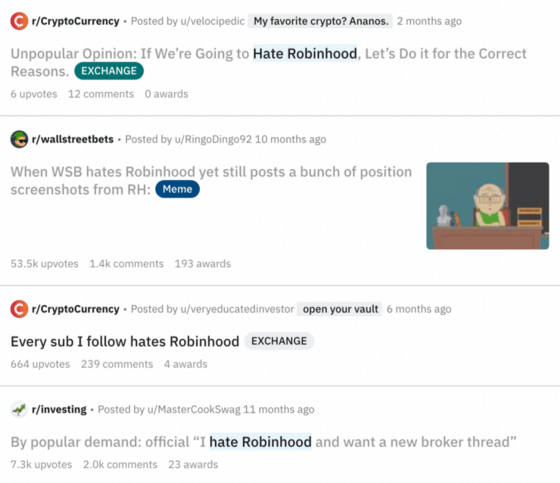 In the third quarter of 2021, Robinhood's earnings report was dismal. Its total revenue, USD365 million, didn't live up to analysts' expectations of USD431 million. The net loss was 1.32 billion, a substantial increase of loss from the 11 million in the same period last year. In addition, Robinhood's user growth has crawled almost to a halt. New users had been developing rapidly before but showed negative growth for the first time in Q3 2021. Robinhood's stock price also fell all the way down, as low as "50% off" the issue price.

Robinhood's embarrassing situation is rooted in the fundamental contradiction between its claimed mission to 'democratize finance for all, and its monetization model relying on Wall Street giants. At the core of it, it is the paradox of commission-free trading.

As the pioneer of zero-commission stock trading, Robinhood undoubtedly disrupted the traditional brokerage industry. For users, it is believed that small shares of stocks could be traded without commission, and the trading threshold is thus greatly reduced. However, ' business never gives anything for nothing, and that a price is always exacted for what it bestows '. People do not realize they would have to pay a price that might be much higher than the commission fee.

Commissions, in short, are service charges for money transactions. In a traditional brokerage commission model, when receiving a user's order, the brokerage will place the order at the exact market price without going through any market maker. And the brokerage would charge a commission fee for the service based on the transaction amount. This was how brokers managed to make money once upon a time.

After the revolutionary exemption of commissions, Robinhood needs to find another way to monetize. And they offered an answer of Order Flow Payment (PFOP). Order flow payment means that a broker sends users' orders to different order execution parties, the market maker, to get paid. And the brokerage will receive the commission offered by the market maker since they send orders to them.

In short, brokerages earn from the price difference by directing user orders to market makers. The more frequent the user transactions, the more the brokerage earns.

Take Robinhood as an example. In 2020, order flow accounted for 75% of Robinhood's revenue, and it mainly cooperated with three market makers. Among them, the largest one was Citadel Securities LLC, a market maker under Citadel LLC, a top international hedge fund. The orders with Citadel generated 34% of the revenue that year.

In the price war were online brokers have been rapidly slashing commission to zero, however, free of charge sometimes could be even more expensive. Investors seem to have saved a fraction of the commission fee, but they will inevitably buy stocks at a higher price or sell their holdings at a lower price, and lose money without knowing it.

Let's do math together.

An investor bought 200 shares of AAPL stock at $170 from Interactive Brokers, who would charge you a commision fee. The cost of this order in total would be the stock market price, along with the $0.7 commission fee and other fees of $0.73.

Let's say the same investor bought 200 shares of AAPL stock on Robinhood at the same market price of $170. He/She does not need to pay for the commission, though, the actual transaction price per share offered by Robinhood would become $171.5, of which $1.5 is the price difference they will make from trading with the market maker.

IB seems to have a higher "threshold" for investors, but the extra fee is not that significant. Trading on Robinhood, however, looks like a bargain when it comes to 'free' stock trading, it is even more expensive.

Democratization of Finance: Truth or Lure?​

Young investors do not bother to do the calculations. They are impressed by the rudimentary promises of "Provide everyone with access to the financial markets". The reason behind this might be Robinhood's clever branding. Robinhood branded itself as a leader advocating financial democracy who is on the opposite side of Wall Street financial hegemony, which pushes the exact button of U.S. young investors, particularly Gen Z.

Coining the phrase is one thing, living up to it is another. The idea of democratizing finance is everywhere in Robinhood's product design.

In 2015, Robinhood was the first to implement its zero-commission trading system among securities firms, breaking the shackles of traditional stock trading and forcing other players to cut off their prices.

Then it introduced fractional stocks. The minimum unit of stock was then reduced to one BUCK, rather than one SHARE. Investors are allowed buy to own only part of a share with very little money. 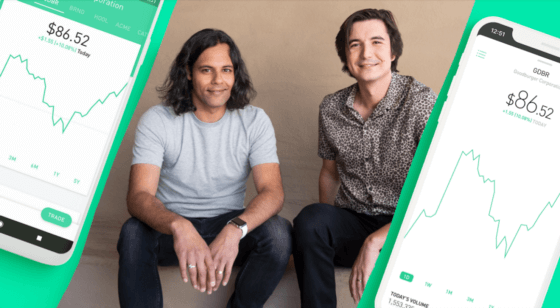 In order to get millennials' and Gen Z's attention, Robinhood made its entire user interface simple, easy to navigate, entertaining, and game-like, and was committed to achieving a user experience of "buying stocks is like playing a game".

Robinhood, which is at the forefront of fintech innovation, has also successfully seized the moment when crypto became popular. In August 2019, Robinhood launched its cryptocurrency trading service in the United States and then introduced its own crypto wallet in the first quarter of next year.

It is undeniable that Robinhood was and still is a young and innovative force entering the legacy investment world. Robinhood's financial democracy campaign was effective, and quickly become famous and welcomed among young and retail investors.

As Robinhood gained fans and popularity across the country, it gained more income through order flow. This flywheel was spinning at a high speed, until the bubble burst. Came the turning point of the story, the GameStop short squeeze event.

GameStop is the world's largest video game retailer, selling games, consoles, game merchandise, etc. It was an important part of American game history. In January of 2021, knowing their "childhood" could be destroyed by the Wall Street Capital, retail investors started a short-squeeze war against institutional investors who were shorting GameStop.

From January 22 to 29, the Reddit stock trading forum, or r/wallstreetbets (WSB) began to short-squeeze the GME stock, leading to a soaring of GME stock price, from $40 to $400 in one week. Institutional investors lost heavily. Robinhood, the brokerage firm most favored by retail investors and young people, has come under the spotlight of the event.

But Robinhood disappointed retail investors at a critical moment. On January 28th, Robinhood removed the buying option of GME, AMC, Blackberry, Nokia, and other stocks in wild price swings. GME stock price closed down by more than 40%. After February 1st, GameStop's stock price plummeted continuously and fell back to $50 within a week, costing countless retail investors dearly. 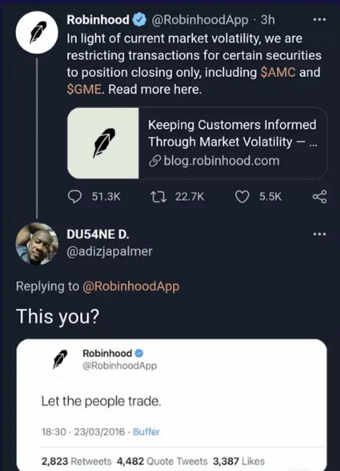 Changes happen overnight. People on Reddit were irritated, believing that Robinhood sided with Wall Street giants to suppress retail investors. Ironically, the image of a fighter for democracy which was meticulously maintained over the years was destroyed by Robinhood itself.

How the "Democratization of Investing" Image Crumbled​

In order to quell the rage, Robinhood issued a document on January 29, justifying their act of restricting retail purchases. In short, when there are more transactions on the platform, the greater the stock price volatility, and the more credit risk Robinhood needs to undertake. In this GameStop incident, the massive buying of retail investors would result in a requirement for an extremely high margin for Robinhood, a number that Robinhood could not afford.

In the GameStop hearing afterward, Robinhood CEO Vlad Tenev stated that if Robinhood was unable to afford the margin, the platform would be forced to liquidate, and it would not only be the stockholders of GME who will suffer losses but all users on the platform. It is worth noting that the US SEC did not penalize Robinhood for the GameStop incident. 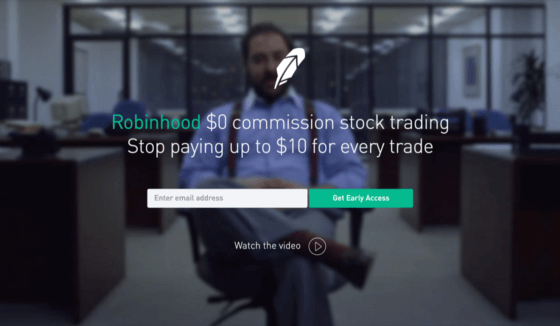 However, the wrath of the public did not go away. People found that in the GameStop event, Robinhood's largest client, the order flow market maker Citadel Securities LLC was also a party of interest closely related to the event.

Another character was Melvin Capital, a hedge fund that shorted GameStop. On January 22, GME's stock price began to soar, and the assets under Melvin Capital's management shrank by more than 30%. In order to prevent further loss, Melvin Capital had to forcibly liquidate its position and obtained a total of US$2.75 billion in financing from peers Citadel LLC and Point72 Investment to close short positions. And Citadel LLC is the parent company of Citadel Securities LLC, Robinhood's largest market maker.

Just three days after Melvin Capital raised funds from Citadel LLC, Robinhood announced the block of GME and other stocks trading. The timing was so good, that led to a conspiracy regarding Robinhood picking side with its biggest financial supporter from Wall Street. 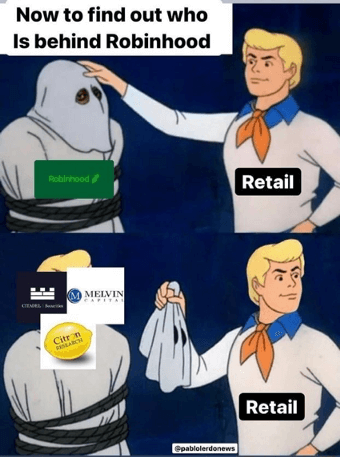 Whatever the reason was, this incident exposed the fundamental contradiction between Robinhood's business model and its mission to protect users' interests.

In the glory of zero commission, Robinhood suffered from a backlash: the crafted brand image crumbled and so did the trust it built. When there's a conflict of interest between large market makers and retail traders, Robinhood seems to stand with its real "sponsor". Retail investors have obtained free trading services from Robinhood, but the price behind the free services is a higher transaction price, opaque interest relationships, and an unsafe investment environment.

To be recognized by the capital market and regain the trust, perhaps Robinhood needs to have a new story beyond zero commission before the end of the bull market.