Roblox is the world’s largest multiplayer online game creation platform. Its Daily Active Users (DAUs) reached 43.2 million in the second quarter of 2021, with each user spending around two hours on the platform every day. More than half of them are young Americans under the age of 13. 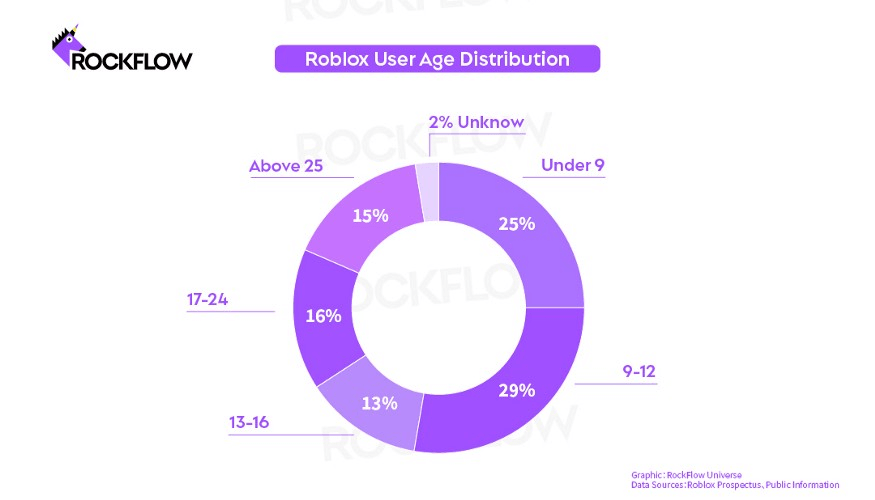 Statistics show that for young Americans between the ages of 9 and 17, nearly 70% are Roblox users. They see Roblox as more than just a game, but an everyday social platform and online playground. In 2021, Roblox got listed on New York Stock Exchange via Direct Public Offering, with a market value of $45 billion. In the prospectus, Roblox defines the concept of Metaverse and is regarded as the first stock of Metaverse. The success of Roblox has sparked widespread discussion of Metaverse globally. Metaverse is seen as the next generation of the Internet, and Web3.0, characterized by decentralization, is the inevitable path to it. By analyzing the underlying architecture of Roblox from three dimensions: social network, content system, and economic frame, this piece tries to find out the core competitiveness of Roblox, and discuss whether Roblox’s centralized paradigm will be a hindrance to its move to Web3.0? Is Roblox a real Metaverse?

Dave Baszuck, the man behind Roblox is actually from the 1960s generation, 21 years older than Facebook founder Mark Zuckerberg. Before Roblox, he started a programming education company for children, Knowledge Revolution. In 2004, Dave Baszuck and Erik Cassel, a former colleague at Knowledge Revolution, co-founded Dynablox, a precursor to Roblox. Two years later, the first version of Roblox Studio went live, allowing community members and users to start making their own games with a simple, low-code creator tool. As UGC (User Generated Content) platform, Roblox is divided into three main segments: the Roblox Cloud for studios and clients, Roblox Studio for developers and creators, and Roblox Client for users. The Studio provides development tools and tutorials. The Client generates game, consumption, and social data to the Cloud. The Cloud provides technical support for the Studio and releases the approved content to the Client in the form of information flow. Roblox’s success is more based on an innovative paradigm than advanced technology, and low code technology maturity makes it possible to be a UGC gaming platform. The company spends most of its r&d money on the game engine and cloud storage. The company has maintained an r&d expense ratio of 20%-30% in the last three years. 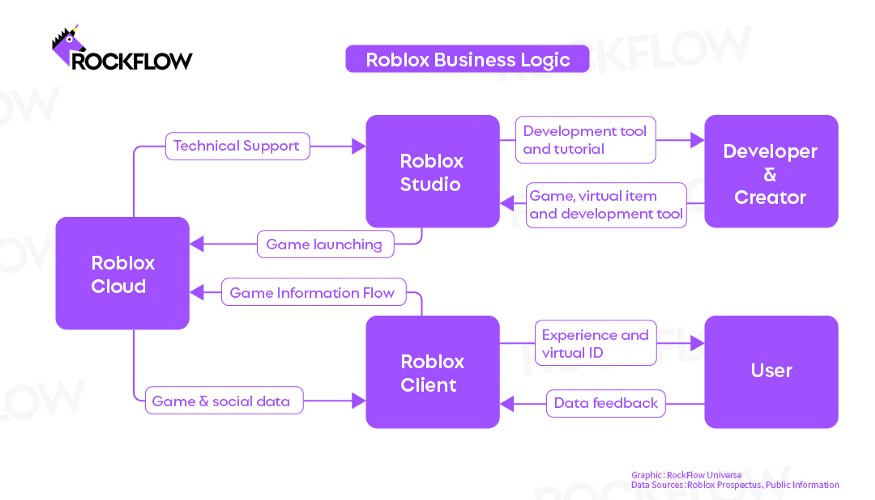 By lowering the threshold of game creation, the creator group has been greatly expanded, which stimulates the social connection within the users. Imagine a 12-year-old boy developing his own game, getting good clicks, and even earning money, how proud he would be in front of his peers. 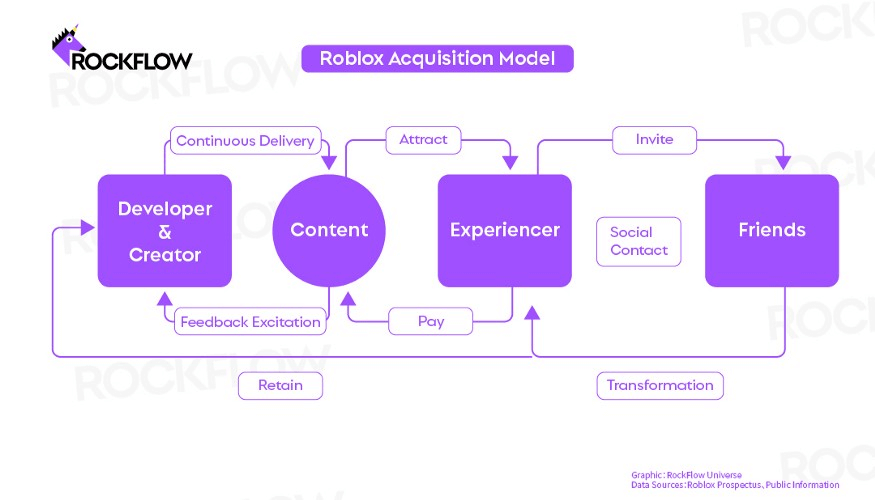 The second positive feedback loop of Roblox is currency structure. Robux is Roblox’s original currency, distributed among developers and creators, who can gain it by selling their original games, virtual goods, and development tools. Users who gain Robux thorough creation or top-up can purchase virtual goods, pay for development tools, subscribe or advertise on the platform. Creators can also exchange Robux for US dollars, though the process is not easy. To convert Robux to dollars, you need to join Developer Exchange Program, earn more than 100,000 Robux and own a platform account in good condition. 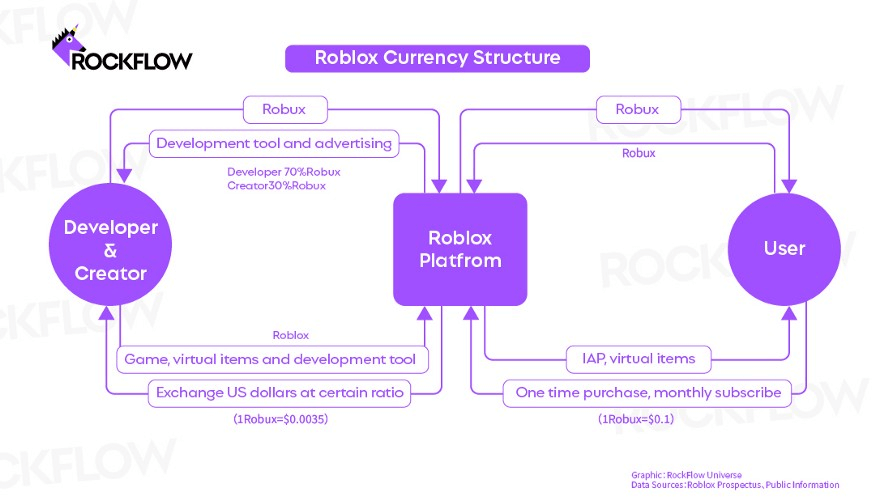 As a UGC platform, Roblox’s monetization depends on players’ Robux top-up. According to the company’s announcement, currently, all user recharge is divided into four parts: app store fee, developer share, platform maintenance cost, and Roblox share, of which developer incentive accounts for 24.5%. 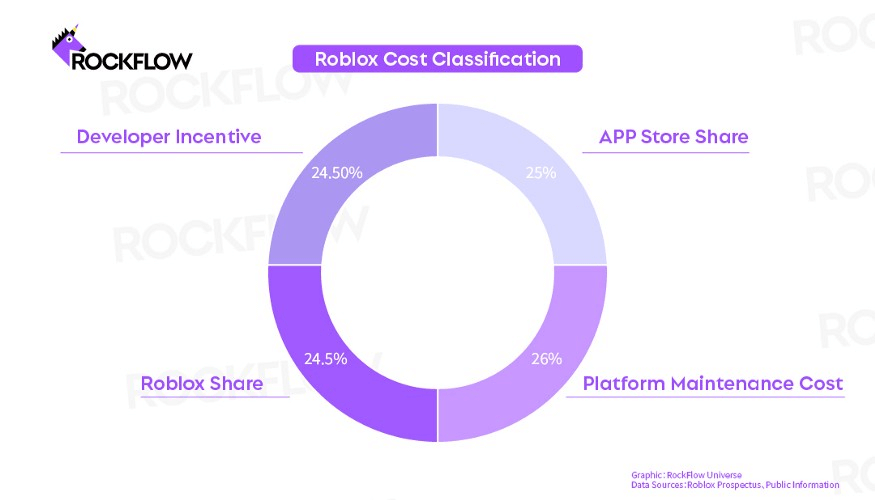 Thus, the platform takes nearly 51% of the revenue generated by the developer, leaving only 24.5%. While Core, a platform similar to Roblox, gives 50% to developers. Although there are plenty of developers making good money from Roblox, they are still facing the inequality created by the monopoly of the big platforms. This also points to Roblox’s major shortcomings as a Web2.0 platform enterprise, unjust production relationships, and value distribution.

Roblox is only half Metaverse. Combining the identity system, social network, content creation, and economic system together, Roblox creates a whole new digital universe for young people. With their digital identity, the next generation could experience digital social and economic life in a completely autonomous and parallel cyber society. On the other side, although the company consciously incentivizes developers to create a positive content creation cycle, the native nature of a centralized platform still means that Roblox does not maximize the benefits of developers and creates obstacles in the incentive process. Roblox players have to accept the platform’s value distribution rules. If they break them, their account is at the risk of being banned. When there is a disruptor in the market, Roblox might be at risk of losing developers as other game companies embrace the Metaverse model and compete on price with a higher percentage to developers. In an ideal Metaverse, it should be decentralized. The Metaverse cannot exist without a decentralized identity and value system, which is more important than advanced hardware technology and realistic immersive experiences. Web 3.0 should also be a platform created and maintained by a decentralized community. The value system is both a system of market transactions and a system of social ethics. With blockchain being the underlying technology of the value system, it could ensure the consensus and fair distribution of value through smart contracts, thus retaking power from the monopoly platform giants and delegating it to everyone involved. Platforms become a commodity for users and individuals. That is the true Metaverse we believe in.